Plasma descum (or degunk) is the process of removing residual contaminants on a printed circuit board (PCB), often after a desmear or etch back cycle. 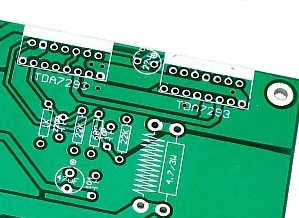 In the past, manufacturers used concentrated acid for descumming printed circuit boards. Many different chemicals were used to etch the copper boards but all of these chemicals were harmful to the environment and dangerous to workers.

After the introduction of plasma etching machines in the 1980s, PCB manufacturers have started using plasma as their preferred technique.

Plasma is the preferred way to etch circuit boards and to clean contaminantes after a circuit board is etched, often times before applying a coating.

These procedures allow a physically strong and electrically clean solder once the board is completed.

Descum is most often used to clean the plastic residue left behind after drilling holes on the PCB for wire attachment.

The plastic slag left behind must be cleaned away properly to ensure strong wirebonds and consistant, low resistance electrical connections.

This process is generally performed in a plasma asher with oxygen plasma; safer and more environmentally friendly than chemical etch processes.

Plasma technology is also excellent at cleaning, the same plasma system can clean the PCB board of other contaminants during the descum process.

All volatile byproducts formed by plasma machines are removed by the vacuum pumping system, avoiding exposure to the user. 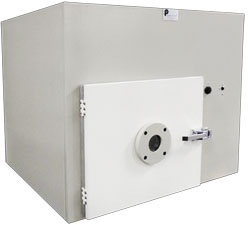 PE-200
The PE-200 is the ideal solution for large batches or larger wafer sizes. 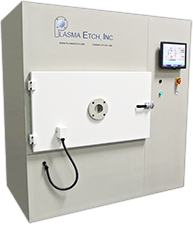